By Natalie RosePublished On: February 15th, 2022

First Nation Elder Says NO to the Jab 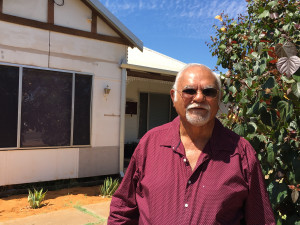 First Nation elder Ron Harrington-Smith was born in Windich Creek. As a young man, his dream was to become a farmer so, he attended an agricultural school in Esperance. When he returned to Kalgoorlie, at the age of sixteen, police told him to leave or face jail time. His only crime: the colour of his skin. At that time, Aboriginals weren’t allowed in town and were forced to settle in the outskirts in areas known as the ‘Tea Gardens’. Ron went on to pursue a career in mining, married and had five children. Now retired, he spends most of his time caring for his people, preaching the word of God and fighting for justice.

Ron Harrington-Smith has chosen not to get the COVID-19 vaccinations. Like many West Australians, who have made the same decision, he is now presented with new challenges as a result of the unlawful vaccination mandates. In an interview, Ron speaks out against the mandates and shares how they are affecting his birthright, his wife and his people.

From Monday 31st of January, the WA State Government announced that the unvaccinated were no longer permitted in hospitality venues. This means that Ron is now excluded from attending native title meetings such as the Nyalpa Pirniku authorisation meeting which is taking place on the 16th and 17th of February at the Railway Hotel in Kalgoorlie. This meeting is held by the Native Title Services Goldfields (NTSG) and they have informed claimants that they must be vaccinated in order to attend in person. At this meeting, claimants will be working together to make important decisions that will impact how native title matters are managed in the future. Ron is passionate about this issue and deeply concerned about the mismanagement of funds by service provider NTSG. According to Ron, the service provider is paid millions each year and yet, the claimants are not being looked after. So, he asks “where is the money going?” He stated that “we don’t accept NTSG,” we want to “run our own show”. Ron strongly believes that the mandates are just another ploy by the Government to take what is rightfully theirs “NO jab, NO meeting, NO claim” he surmised. Ron explained that “you can follow my genealogy… way back before the white man came here…that’s my claim and they don’t have (any) right to stop us from going”. Ron has attempted to solve this problem by suggesting the meeting be held outside or in the bush. Unfortunately, NTSG will still be going ahead with the meeting at the Railway Hotel.

The WA State Government’s unlawful vaccination mandates are designed to make life extremely difficult for the unvaccinated. Ron’s wife, June, has also refused the COVID-19 vaccinations and is now suffering in silence. She patiently waits for the medical care and treatment she needs to increase her quality of life. Recently, June booked in her spinal surgery and when she disclosed her vaccination status she was met with disbelief and disapproval. The receptionist reluctantly booked her in only with the proviso that June be vaccinated beforehand. She recalled the receptionist remarking that, “we’ll leave it there in case you change your mind later.” But June won’t be changing her mind. She is standing firm and will not be getting the jab. After making her booking, June was sent a letter of confirmation which included a one-page attachment titled ‘VACCINATION MANDATE’. It went on to say: ‘all patients and visitors over the age of 16 must show proof of COVID-19 vaccination status or a medical exemption on arrival.’ After reading this passage, June immediately assumed that she was going to be denied entry into the clinic. According to the draconian mandates only unvaccinated visitors are banned from hospitals. The letter confirms this by stating ‘Visitors who are unvaccinated, or have only had one dose, will not be able to attend the clinic.’ However, the letter goes on to state that, ‘Patients who are unable to provide proof of vaccination must contact the clinic…to discuss their treatment prior to the appointment.’ Therefore, despite the clever wording, June will be able to receive the medical care which she is entitled to, albeit with additional challenges.

The WA State Government has unlawfully mandated the COVID-19 vaccination for a wide range of industries. Thanks to the Public Health Order (PHO) directives, many West Australians have sacrificed their livelihoods to maintain bodily autonomy. Ron is worried for his people and the damage the mandates are causing in his community. He explains that these mandates are “leading the country to suicide, family break ups, (as there’s) no food on the table. (We) can’t get enough money in, to pay for food and electricity and perishables and essentials from the shops because you don’t have the dough. But you got to have the jab to get the job- NO Jab, NO Job.” According to Ron, Aboriginals generally distrust the Government and “fear the jab”. Consequently, many Aboriginal families are now facing financial hardships and have decided to flee to the outskirts, setting up camp along creeks. Ron frequents the camps to donate money, provide tucker and have a yarn. “The first thing they ask is ‘What do you think of the jab? And I tell them ‘WANTI, WANTI!’ which means leave it, don’t take it. But they say, ‘I got to take it for the money, I gotta buy food”. He encourages them to live off the land like their mothers and fathers taught them but admits it’s a hard life. “We should not be pushed back into our traditional status and live like a traditional man. We did it before to survive…They’re stuck between a rock and a hard place, like you, me and everyone”.

What is your message for Kalgoorlie-Boulder?

“Stop playing funny buggers and look at the situation where we can make a change within the plight of the Aboriginal people who are on the fringes. (In fact), they’ve been on the fringes their entire life and nothing has changed… it goes on and on.” Ron Harrington-Smith

Like many West Australians, Ron Harrington-Smith has chosen not to get the COVID-19 vaccinations. These unlawful mandates have been deliberately designed to make life extremely difficult for the unvaccinated. Ron speaks out against these mandates, will you?

SPEAK OUT. DO NOT COMPLY. TOGETHER WE WILL STOP GOVERNMENT TYRANNY.

Crossing The
Border in 2022

"I had to fill my heart with love, it was the only way to get through." On the 24th of February 2022, Tonia Sambo was arrested after returning to Western Australia unvaccinated. The incident was captured by partner Kim and shared on Facebook the following day. In

Kalgoorlie Hospital What is happening to our country? Families divided, censored medical professionals, soulless government, hospitals at breaking-point and countless Australians permanently harmed, injured or dead as a result of the COVID vaccinations. This is the story of one brave family that wanted to speak out against

Dr Malone is a leading researcher and inventor of the liposomal mRNA vaccine technology, which is in use right now. Anybody with children considering vaccinating them, must watch this first. Hear what pioneer of mRNA technology, Dr Robert Malone says about using this technology on children. On Dec.